Today’s compound is most excellent. First of all it has a prefix – 無 (む). 無 negates anything it precedes, as do 非 and 不. I’m embarrassed to say I can’t remember the difference between the three; whatever – just keep that in mind whenever you see one of those three, okay?

濾過 (ろか) gets most of our attention. I had no idea what the first kanji meant, but Mr. Jim Breen tells me it means filter. That makes sense, and it also made me realize what 過 is doing there. Is 通過 (つうか) familiar? 通過 is what happens when you’re standing on a train platform and one of those 通勤特急 trains comes howling by, making you wonder how many people bite it accidentally via train every year. 通 means pass and 過 means through or to exceed/go beyond. To pass through/beyond a point. So 濾過, which is a doozy on the 変換 system apparently, means filter through something or to pass through a filter. Add the 無, and this becomes not being passed through a filter or, in normal English, unfiltered.

What’s isn’t being filtered, you ask? Beer, of course! To be more specific, Kirin’s line of premium beers. They have a pale ale they sell regularly, a white beer that was limited edition I believe, and now the winter limited beer – Beer Chocolat. 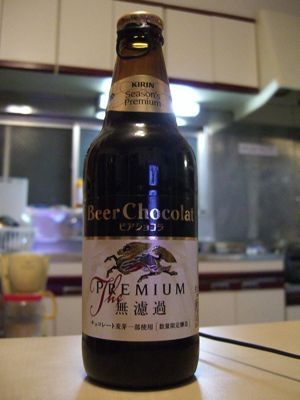 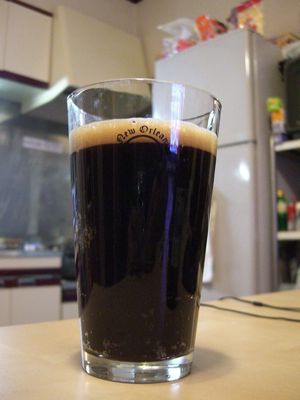 Smells like a lager to me, which is disappointing, but it does have a little roastiness and no, I repeat, NO actual chocolate. It’s not one of those beers, it’s a real chocolate beer because it uses chocolate malt: チョコレート麦芽 (ばくが)一部使用, as it says on the bottle. Chocolate malt, as most respectable drinkers will know, is that malt roasted more than caramel malt and less than black patent malt; roastier flavor than caramel with more sugars intact (not burned away) than black patent.

And like all unfiltered beers, this beer is fresh (expires in 90 days) and has yeasties floating about. Brewer’s yeast is good for you, so drink up.