With the goal of stirring up even more interest in Murakami between now and mid-October, when the Nobel Prizes are announced, I will post a small piece of Murakami translation once a week from now until the announcement. You can see the other entries in this year’s series here: Jurassic Sapporo. 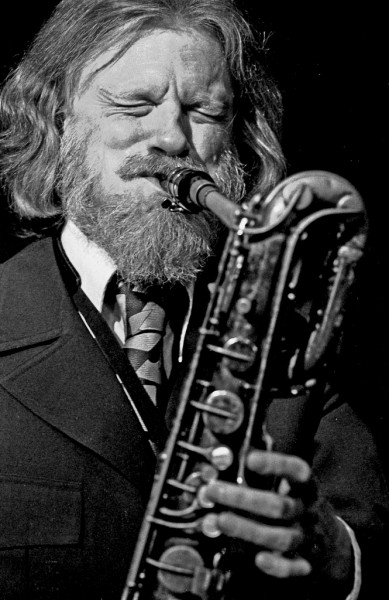 Gerry Mulligan after he let his crew cut grow out. (From Wikipedia.)

Thanks to Sgt. Tanuki, last week I discovered that I’ve been reading an edited version of Dance Dance Dance. His blog post about the novel details the long sections of Chapters 1 and 2 that were abridged in translation. As I mentioned in the post last week, it sounds awfully similar to some of the writing from “The Twins and the Sunken Continent,” and it also makes the section from last week make more sense because it establishes the “I’m from a different planet” theme earlier. I’m eager to check it out – finding old copies of DDD will be one of my projects the next time I’m in Japan.

What this means is that Murakami must have gone through the text in 1991 when he was compiling his Complete Works, compared his old version with Birnbaum’s translation (or at least noted which sections had been cut), and made some of the identical cuts himself. While the cuts make this year’s Murakami Fest not nearly as exciting as it could be (if I had the original text), it does mean that we learn something about Murakami’s choices – these are cuts that Murakami decided to keep despite their absence in the English translation.

So I think it’s telling that Murakami would keep a short aside about jazz saxophonist Gerry Mulligan.

In Chapter 7, Boku has asked the Dolphin Hotel receptionist out, and they meet at a basement bar a short cab ride away from the hotel. Here’s the section when Boku arrives:

I was met at the door with the warm sound of an old Gerry Mulligan Record.

The Japanese, however, is slightly more extensive:

I opened the door to an old Gerry Mulligan record playing at a pleasant volume. A record from back when Mulligan still had a crew cut and wore button-down shirts, back when Chet Baker and Bob Brookmeyer were in his band. I listened to it a lot a long time ago. Back in an era before someone like Adam Ant came on the scene.

Who would give themselves such a terrible name?

I sat at the counter and slowly enjoyed a J&B-and-water as I listened to the high quality solos of Gerry Mulligan.

This seems like an easy cut to make, and I imagine that Birnbaum made it because the Ant reference would soon be dated (if it wasn’t already?) and not because there’s anything wrong with Gerry Mulligan. It doesn’t surprise me that Murakami wanted to keep it; I do like that image of Mulligan in a crew cut and button-down shirt. (I wanted to use this photo in the post, but it’s not Creative Commons friendly.) It does, however, reek of old man frustration with change, and I guess that’s kind of what this book is about to a certain extent.

On a language note, I wasn’t quite sure what to make of the tone and implications of なんていう下らない名前をつけるんだろう, so I may have translated a little freely. What do y’all think? Any suggestions?

So yeah, that’s all I’ve got, really…unless…what? You ARE interested in hearing an extended ramble about Gerry Mulligan? Awesome!

Gerry Mulligan is the greatest and most famous baritone saxophonist. NPR has an excellent profile of him in the Jazz Profiles series. (Also worth listening to are the two two-part Duke Ellington profiles, the Count Basie profile, and the Nat King Cole profile among others, if that’s your kind of thing.) If you haven’t listened to his music before, I recommend starting with some of the “Mulligan Meets” series. Mulligan Meets Monk, Mulligan Meets Ben Webster, and Mulligan Meets Johnny Hodges are all top notch; easily accessible jazz that also makes great writing music because it isn’t too “hot” or complicated.

My favorite album, however, is “Something Borrowed, Something Blue,” which I’ve discovered is only available on LP…strange since I only have a digital copy of it. My guess is some jazz maniac uploaded it to teh torrentz site where I found it. If you can track this record down, I would highly recommend doing so. Mulligan plays alto, apparently, and the album starts with a superlative version of Bix Beiderbecke’s “Davenport Blues.” If I was stuck on a desert island with only one album, this might be the one I would take.