Fucking Ultros. I just got beat down in the opera house, and I’ve realized I probably either need to A) head back to Narshe and pick up another party member, B) hope that I can still add Shadow, or C) grind until I level enough to take the bastard down.

Which is basically to say that I haven’t made much progress in FFVI. I also haven’t found a seat on my commutes all that often. The El is unforgiving, especially between Sheridan and Fullerton, and I need at least one hand free when standing.

But I did come across this: 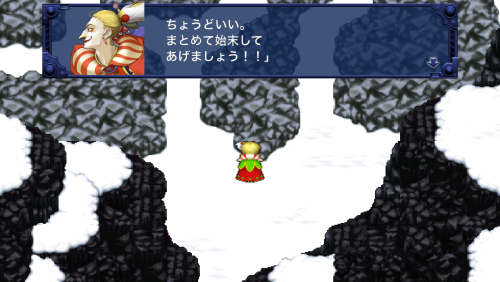 It pays to have a large vocabulary of words that mean “kill” or “destroy” when making video games, and 始末 is, effectively, one of those. In this case, the compound has the more general meaning “manage” or “deal with” (with an implied finality, thus death).

It’s also a cool kanji in its own right, combining two opposite characters for “beginning” (始) and “end” (末).

It has other meanings as well and confuses some with 仕末. This is a nice little blog post that concisely summarizes some of the frequently encountered forms:

Fortunately for our heroes, Kefka isn’t that adept at dealing with them.