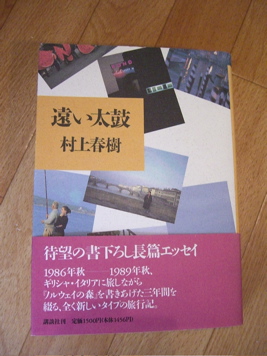 Murakami (Do I even need to tell you which one?) lived in Europe for three years between 1986 and 1989. In addition to novels and short stories, he also wrote a lengthy set of travel writings called Tōi taiko (遠い太鼓, A Distant Drum). 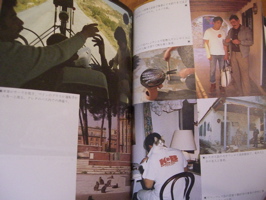 During his travels he spent some time on a small Greek island, and the tourists there often sunbathed nude. Apparently only the local Greek men (he calls them "Zorba Greeks") went to the trouble of checking out the boobs. This resulted in a three-page discussion of nude sunbathing and the following moment of complete linguistic genius:

(I was going to write the page number at the end of that line, but when I realized it was page 69, I thought I’d better explain what I was doing.)

The Japanese is so economical that translating it won’t be as great, but here it goes:

That kind of expresses what’s going on with the verb. 出す literally means “take out,” but I translated it as “reveal” in order to maintain the verb tenses and still have the sentence sound okay, although, now that I think about it, “taken-out boobs” is a pretty funny phrase.

The major difference between the English and the Japanese is that no people are explicitly involved in the Japanese sentence; all of the subjects are implied, and he uses the loaded word 勝手 (かって). "Prerogative" feels a little complicated, but I guess it does the job. 勝手 is often used as an adverb (勝手に〜) to mean "do ~ however I want" or "do ~ even though I’m thinking only of myself and not the Japanese collective spirit." One word that pops up in the dictionary is "arbitrary." So does "one’s own way" and "selfishness."

So yes, long story short, if you reveal your boobs, do not be surprised when people look at them.