With the goal of stirring up even more interest in Murakami between now and mid-October, when the Nobel Prizes are announced, I will post a small piece of unpublished Murakami translation once a week from now until the announcement. You can see the other entries in this series here: 1, 2, 3.

A couple weeks ago I went to the first day of the three-day Oktoberfest celebration in Hibiya Park. They had a tent set up, a stage for the German band, and really long lines for beer (Super Dry, Lowenbrau).

It took a few minutes, but once the music got going, it was total madness. I saw a stout, sweaty mother wearing a utility belt imploring her embarrassed (and seated) high-school-aged son to dance; a group of Americans wasted trying to make a pyramid out of empty beer mugs; a group of company workers all dancing madly; and a whole tent full of people doing a samba line dance to polka music – it was an anthropological clusterfuck. Still, the whole thing was very Japanese: mildly participatory, highly intoxicating, and rigidly controlled. 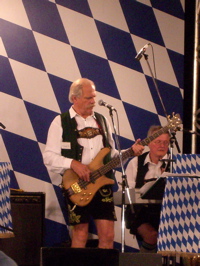 Murakami’s story “Lederhosen” has been published in English, but not in its complete form. It’s the first story in Dead Heat on a Merry-go-round (回転木馬のデッド・ヒート), my favorite of his collections of short stories. Murakami initially maintained that all the stories in the collection had actually happened and that he was just relaying them to the reader as they had been told to him by friends and acquaintances, but he later admitted that they were all fiction.

The English translation was included in The Elephant Vanishes, but Alfred Birnbaum had to adapt it slightly, as the first few paragraphs make no sense unless you’ve read Murakami’s introductory remarks to Dead Heat.

Here are those paragraphs:

I decided to write the series of sketch-like stories contained in this book one summer a few years ago. Up until that point I hadn’t once wanted to write anything in this style, so if she hadn’t told me that story – and hadn’t then asked me whether or not this kind of story could form material for fiction – I might not have written this book. So that makes her the one who struck the match for me.
But it took a fairly long time for the flame to reach me after she struck that match. Some of the fuses that lead to my body are incredibly long. Sometimes they are too long, even longer than my standard of conduct or the average lifespan of my emotions. When that happens, even when the flame finally makes it to me, sometimes I can’t find any meaning in it.  But in this case, I kind of ignited within that time limit and ended up writing these stories.
The woman who told me that story was a junior high school classmate of my wife’s. She and my wife weren’t exactly all that close when they were in school, but they once ran into each other randomly after they were in their thirties, and thanks to that chance meeting, they’ve been hanging out quite often ever since. Sometimes I feel as though, to husbands, there is no one with as awkward an existence as a wife’s friend, but despite that, ever since the first time I met the woman, I’ve been able to have a sense of affection for her.

Sadly my prose reads nowhere near as smoothly as Birnbaum’s does. He is a master. I’m hesitant to post a link to pirated prose on this site, but it’s all for educational purposes, so what the hell: Yoshio Osakabe, the only bigger Murakami fanboy than myself, seems to have posted the story on his website.

Birnbaum pulled the first three sentences of his translation from deeper in the story to use as the introduction, and it works pretty well. Definitely more of a “hook” than Murakami’s slower introduction.

The only other major change (that I can be asked to find), is the very last line. In the English Birnbaum goes with, “A proxy pair of lederhosen, I’m thinking, that her father never even received.” The Japanese is just the simple 「僕もそう思う」と僕はいった。

Other than “Lederhosen,” “Hunting Knife” and “Nausea 1979” have been translated, both without any obfuscation. They are included in Blind Willow, Sleeping Woman, as is “Crabs,” which Murakami expanded from a small part of the story titled 野球場 (やきゅうじょう, Baseball Field).

No major Japanese lessons today. There was one sentence that gave me a ton of trouble. This is it: 「僕はときどき妻の友人くらい夫にとって奇妙な存在はないような気がするのだが、それでも彼女には最初に会ったときからある類の好感を抱くことができた。」There are plenty of variables when translating that sentence, the most frustrating being the whole plural-singular debate. Sigh. The other thing to remember, which my roommates reminded me of, is that くらい = ほど.

Here are some pictures of my first copy of Dead Heat. 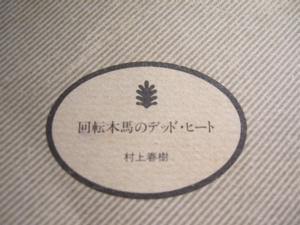 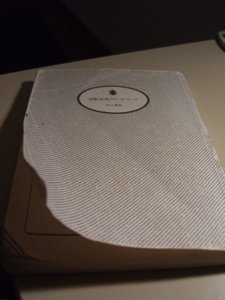 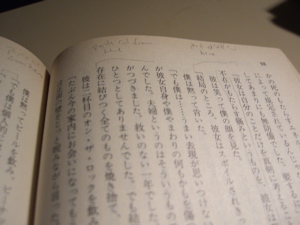 I bought it kind of randomly in a used bookstore near Waseda University. When I started reading it, I realized what it was (the collection of “true” stories) and got more interested, so I decided to bring it along with me on a month-long trip to South East Asia as my only book. I figured I was in Japan to learn Japanese, and if I was going to take a trip to foreign countries with only English-speaking friends, I should be reading Japanese. So I guess it’s the first Japanese book I ever read…kind of. I can’t remember if I got all the way through, and I wasn’t really looking up words the whole way, so my first novel is still Risa Wataya’s 『蹴りたい背中』, which still hasn’t been translated into English.

Strangely enough, I was dealing with my own gastrointestinal issues (green poop) when I read “Nausea 1979” in Bangkok.