I have another Bilingual page column in the Japan Times today: “The myths and misery of translating Japanese video games.”

It’s sort of a redux of my post “On Translation and Me” (which was later syndicated at Kotaku) with a few of my Video Game Lingo posts thrown in for good measure.

I haven’t done much video game translation recently, unfortunately. I did a bit in the summer of 2013, and it was a reminder of how difficult and complicated translating dialogue for a major game can be. I only did about 10,000 characters or so, but I got a small peak inside the workings of a larger translation company. It was impressive. I will always be in awe of folks who are able to build living, breathing characters from context-less dialogue text alone. Translators rarely get to see the game they are working on.

I have, however, been doing more Japanese video games. Square has put out a lot of their old catalogue on mobile platforms in recent years, and they were on sale for 50% off until January 5th. So I picked up Final Fantasy VI for iOS.

I somehow scraped together the $60 for Chrono Trigger on the SNES back in the 1990s and spent a week one summer devoted to it, but I never managed to play through Final Fantasy III (née VI). I have at various times played emulated versions partway through (once during college, I believe, and once while I was teaching on JET), but I’ve never beaten it.

I’m a couple hours in and here are some thoughts in game-chronological order: 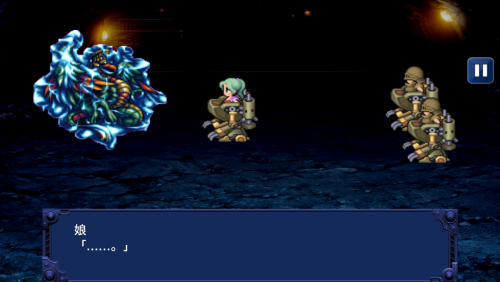 Japanese dialogue has a tendency to use a ton of ellipsis. I’m not quite sure if there is a standard way to deal with these. Occasionally you can translate around them, but it’s sometimes easiest to just leave them. 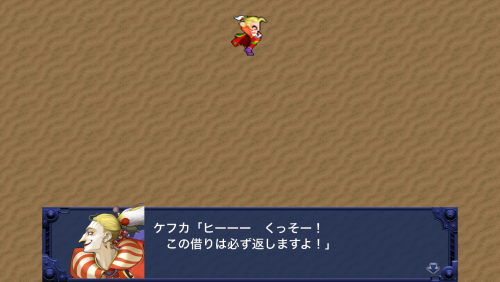 Kefka is even more ridiculous and evil in Japanese. (Partly due to the illustration. An inspiration for the Joker in the Dark Knight movies, perhaps?) As you can see, the language is more colorful in the Japanese original. くそ gets thrown around pretty lightly. Kefka’s infamous laugh, however, is merely ヒッヒッヒ or some variation, which is a bit of a disappointment because the English laugh is so legendary.

This screen grab also has a great word that pops up frequently in games: 借り (かり). 借りができたぞ is a way to say “I owe you one.” I distinctly remember a translator delivering a project with that line, and I was blown away by how succinct and spot on he was. There is a great Chiebukuro post about this phrase and 貸しができる.

Here, Kefka ironically shows that he will 返す the 借り(generally a good thing) without fail (必ず). 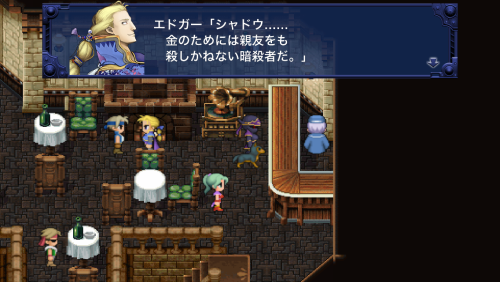 Here’s a great example of the double particle をも and ～かねない, one of my favorite phrases. 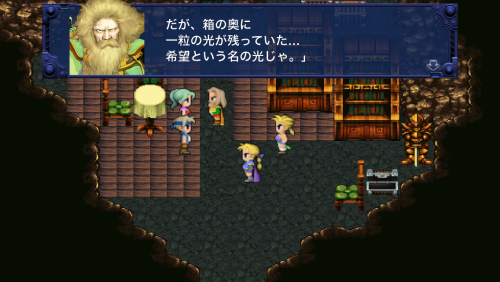 The (new?) character illustrations are great, and Banon looks awesome. You can tell he’s old because he’s got the old-man じゃ in place of the standard copula. 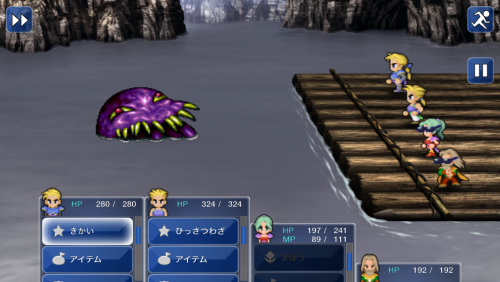 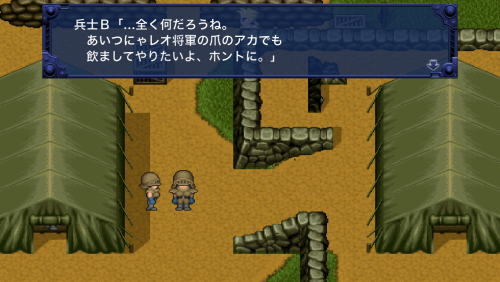 Here’s a lovely-sounding Japanese idiom: 爪(つめ)のアカでも飲ましてやる. Literally: Make someone “drink” the crap under their nails. The kicker is that it’s not even their own nails: It’s someone else’s nail crud. アカ is also given as the kanji 垢, but I assume it’s kana-ized to allow younger players to understand in this case. I wrote a post about this idiom and got a couple of really great comments. Basically, these troops want Kefka to be a little more like Leo…which would happen if Kefka drank some of Leo’s toenail crud. Here’s what one of the commenters noted about the phrase:

In a scenario (profession, trade or any organization) where a rookie without a clue tends to blunder from one breach of etiquette after another, and where a sage advice clearly would be wasted, the only economic advice is to suggest such a concoction be consumed. But, this is said with one’s tongue in cheek only to underline the hopelessness of the endeavor.

So perhaps “take a page out of [somebody’s] book (which happens to be written in a language they probably won’t understand)” would be an appropriate translation. 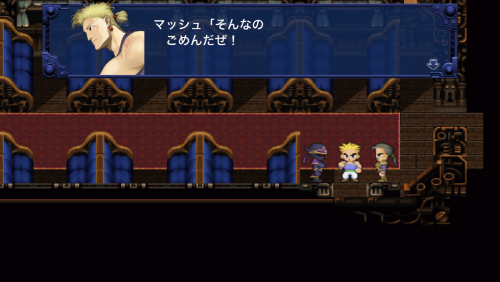 Here’s a nice example of a use of ごめん that isn’t ごめんなさい. I can’t remember what exactly was happening (this is on the ghost train), but whatever it is マッシュ (Sabin) doesn’t want to do it, and expresses that with ごめん. It’s sometimes used with だけ in the expression 〜だけごめんだ to express “the one thing” that someone doesn’t want to do. 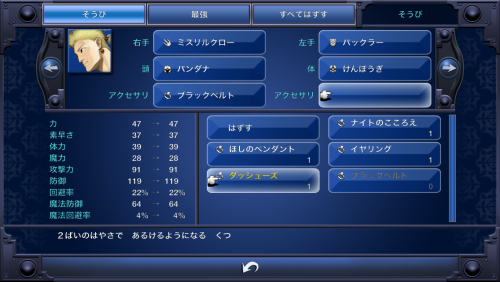 And one thing I noticed in the menu: The explanations for the the different items are given only in kana. This isn’t unusual, I don’t think, but it is a little strange given that all of the story is given in both kanji and kana. Just another reminder that kanji are awesome and reading kana-only writing takes a different set of muscles that you lose quickly once you move past the most basic stages of Japanese study.

Everything about this reboot is great. The graphics are slick and the sound is fantastic. I’m confident that I’ll be able to finish the game this time around, thanks in part to my commute, and because it’s in Japanese I won’t feel guilty about doing so.

3 thoughts on “Final Fantasy VI on iOS in Japanese”