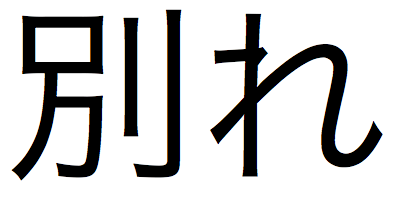 My column is in the Japan Times Bilingual page this week: “Submitting yourself to the 50 shades of arigatō gozaimasu.”

I take a look at ways to diversify your phrases of appreciation: ありがとう is great, but there are other ways you can thank people. Why not add a few to your repertoire?

There’s nothing really wrong with ありがとう, of course, and I mention a couple karaoke songs there at the end that use ありがとう, notably 夜霧よ今夜も有り難う, one of Yūjiro Ishihara’s legendary songs:

I love this song for several reasons: 1) There are few songs that fit within my vocal range (deep), but this is one of them, 2) Yūjiro is boss — as my college graduate advisor put it, he’s basically the Japanese Elvis — and 3) in the video above (if the link isn’t broken) he doesn’t bat much of an eye even though some jackass comes on stage in the middle of the song to pelt him with confetti: 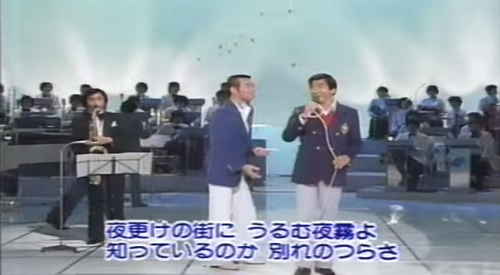 I was going to write something snarky about how the real つらさ is having to share the stage with the confetti pelters, but apparently they are celebrating Ishihara’s first television performance after recovering from an aortic aneurysm: 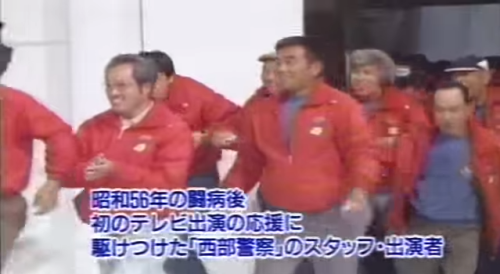 The real pain, though, is 別れのつらさ – the pain of parting/breaking up. Because of the nature of music (especially pop music), 別れ (わかれ) is a word you can expect to encounter frequently in the karaoke box. It’s just a noun from the verb 別れる.

I went hunting for other examples of 別れ and I found a great example: 別れても好きな人.

It’s a duet, one that was originally released in 1969 but got covered in 1979 and became a million-seller for “Los Indios and Sylvia” (ロス・インディオス&シルヴィア). The song gives you a great tour of famous parts of Tokyo, and duets are fun as hell. It’s always good to have a well-known duet up your karaoke sleeve, in your karaoke quiver, etc.

The grammar pattern the song highlights is one of the most basic: Gerund X + も = Despite X/even though X. In this case, “people you love/like/crush on even though you broke up.”

On a side note, the video I found above has a solid example of 壁ドン, a word which drew attention in 2014 when it was a runner up for word of the year. As you can see from this video, it has a pretty long history as a visual trope (although I have no idea what year the karaoke video was produced, could be later than 1979 I assume, but judging from the way the Scramble Crossing looks, it’s a while back): 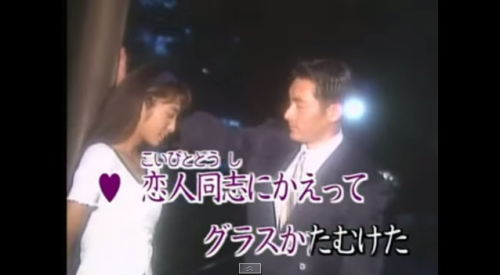