With the goal of stirring up even more interest in Murakami between now and mid-October, when the Nobel Prizes are announced, I will post a small piece of unpublished Murakami translation once a week from now until the announcement. You can see the other entries in this series here: 1.

People often equate Haruki Murakami’s boku narrator with the author himself. Boku has great taste in music, is always hanging out with attractive, quirky women, drinks nice whiskey and tons of coffee, and is really laid back. But in the end, while he might share some traits with Murakami, boku is a fictional character.

Readers who are looking for Murakami’s own personal voice don’t have to look too far (as long as they can read Japanese). In the late 90s he answered reader questions on his website. These have since been collected and published with the title 『「そうだ、村上さんに聞いてみよう」と世間の人々が村上春樹にとりあえずぶっつける282大疑問に果たして村上さんはちゃんと答えられるのか？』, which Jay Rubin has translated as “That’s it! Let’s Ask Murakami!” Say the People and They Try Flinging 282 Questions at Haruki Murakami, But Can Murakami Really Find Decent Answers to Them All? 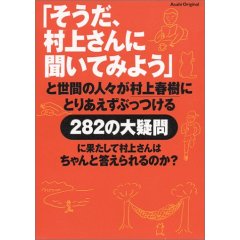 The questions are fairly random in subject matter and tone, ranging from serious to playful. Many of them ask about his writing. Some of the best ones are the strange ones, one of which I’ve translated for this week:

I’m sorry to ask this all of the sudden, but are condoms something that should be kept in the refrigerator? (I’m housesitting for a male friend, and I found some in the butter tray when I was cleaning the fridge.) Japanese teacher living in Los Angeles, U.S.A.

It must be one of the following:

① They feel good when they’re cold.
② He can get them when somebody says, hey, bring me some more wine.
③ He couldn’t think of anywhere else to keep them.
④ He eats them on toast.
(40-41)