Happy Oyster Day! September is the end of the long, drought-like stretch of r-less months. In English we often say that oysters should be consumed raw only during months with an r in their name; thus, as mentioned earlier this year and celebrated last year, September 1st can be considered the beginning of oyster season. It’s open season you mollusk motherfuckers! Ready or not, here I come! This evening I’ll be heading to Shinagawa to partake of oysters. Get in touch if you would like to join.

September also marks the beginning of the run up to the announcement of the 2009 Nobel Prizes this October. Last year I wrote a series of posts with sections of yet to be translated Haruki Murakami prose, trying to stir up interest before the Nobel announcement (in five parts: 1, 2, 3, 4, 5). I will do the same over the next month, starting today. Let it begin.

For the final post last year, I translated two of the super-short stories from the collection 夜のくもざる. One thing I did not mention in that post is the fact that the 36 stories were chosen from a batch of 44 or so. Murakami initially wrote the stories as a series of advertisements for the J. Press clothing line from ’85 to ’87 and then for Parker fountain pens from ’93 to ’95. When he edited the stories for collective publication, he cut a number of them including the very first one – ホテルのロビーの牡蠣, “Hotel Lobby Oysters,” published in April, 1985.

Because this story was not included in 夜のくもざる, the only ways you can read it these days are by owning a copy of one of the original magazines (a number of publications ran the first set, among them Men’s Club) or by visiting the National Diet Library. I did the latter last December and have since translated it for this day. Without further ado, I give you Haruki Murakami’s “Hotel Lobby Oysters,” a perfect story for Oyster Day: 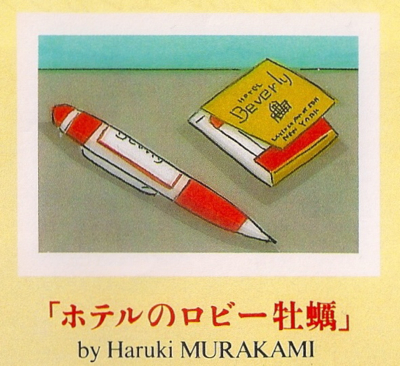 *Update. This is an excerpt of the full story.