With the goal of stirring up even more interest in Murakami between now and mid-October tomorrow!, when the Nobel Prizes are is announced, I will post a small piece of unpublished Murakami translation once a week from now until the announcement. You can see the other entries in this series here: 1, 2, 3, 4. This is, of course, the final entry in this series. Hope you enjoyed it.

夜のくもざる (Yoru no kumozaru, Night of the Spider Monkey) is a collection of 36 超短編小説 – “super short stories.” Each story is only 2-3 pages each, so it’s a great collection when you are first starting to read Japanese prose and are unable to focus for a long time. 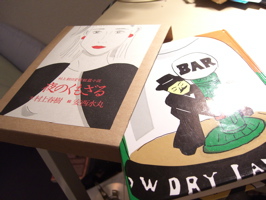 Murakami wrote the stories in two sets as a series of advertisements, the first for a line of clothing from 1985 to 1987 and the second for a fountain pen company from 1993 to 1995. Not that they have anything to do with those things, as Murakami himself readily admits in the afterword. One of his friends just asked him to write short pieces, literally on whatever he wanted to write about, and the stories were set next to the ads in several Japanese magazines. Yoru no kumozaru is a collection of all those stories. I’ve translated one story from each set.

The first story is titled “Eel.” It comes from the early set and features May Kasahara at least five years before she would appear as the infamous biker-blindfolder from The Wind-up Bird Chronicle:

May Kasahara called my house at three thirty in the morning, and naturally I was fast asleep. I was nestled in the thick, warm, velvety mud of sleep with some eel and a pair of long rubber boots, and although it was only temporary, I was devouring a somewhat effective fruit of happiness. And that’s when the phone rang.
Ring, ring.
First the fruit disappeared. Then the eel and the rubber boots. Finally the mud disappeared, leaving only me. Only me – thirty-seven years old, a drunk, and nobody likes me. Who has the right to steal eel and rubber boots from me?
Ring, ring.
“Hello?” said May Kasahara. “Hello?”
“Yes, hello,” I answered.
“Um, it’s me, May Kasahara. Sorry it’s late, but the ants are out again. They’re making a nest by the column in the kitchen. I chased the bastards out of the bath, but tonight they’ve moved their nest over here. The whole thing! They even brought all their tiny little white babies. I can’t stand it! So bring that spray over again. I’m sorry it’s so late, but I absolutely hate ants. Hey, you understand?”
I shook my head violently in the darkness. Who the hell is May Kasahara? Who the fuck is this May Kasahara to come and steal eel out of my head?
So I put that question to her.
“Oops, I’m sorry. Looks like I made a mistake,” said May Kasahara sincerely. “The ants have me all confused. You see, the ants are moving their nest together. Sorry.”
May Kasahara hung up the phone first, and I set the receiver down. Somewhere in the world, ants were moving their nest, and May Kasahara was looking for someone’s help.
I sighed and pulled my futon covers over my head. I closed my eyes and looked for signs of those friendly eel in the mud of sleep again.

Murakami has often mentioned that he starts writing with one word or image in mind, using that as a generative source and following the path of whatever springs into his head from that point. The stories in 夜のくもざる illustrate this technique better than anything else he’s ever written.

The most awkward sentence there is “I was devouring a somewhat effective fruit of happiness.” In Japanese it is: それなりに有効な幸せの果物を貪って（むさぼって）いたのである。Clearly this is kind of an idiom, but you have to keep it somewhat literal because the fruit disappears shortly after. Murakami also uses the kanji for ant – 蟻. Strange considering it’s often written in katakana.

The next story comes from the later set. It is, as far as I know, the only story that Murakami has ever written in 関西弁, the Kansai-accent prevalent in Kyoto, Osaka and Kobe. Murakami grew up speaking it but stopped using it when he moved to Tokyo. There are a million different ways to translate this story, as it could really be translated into any vernacular of any language. I went with the one I’m most familiar with, one that I would call “American preppy thug”:

A monkey, yo. You know, a monkey. And I’m not fuckin around here, there was a real live monkey up in a tree, yo. Surprised the hell out of me, too! Whoa, what the hell, a monkey, I was thinkin, and there it was. Dude’s a monkey, ya know. So then, I just watch the fucker for a while. Thinkin, holy shit, a monkey! So then the dude falls. Straight out of the tree. The fucker slips and falls straaaight out of the tree. And I was starin at it thinkin yo what the hell, what the hell. No lie, bro, a real live monkey fell out of a real live tree. Just straight down, and bam. And don’t they say that shit all the time? Even monkeys fall out of trees. Ya know? Just like the old saying. Couldn’t fuckin believe it. Those old dudes were smart motherfuckers. They said some wise shit. Even monkeys fall out of trees. You don’t come up with shit like that every day. What I’m tryin to say is that a monkey actually fell out of a tree, dude. That shit actually happens. Can’t just laugh at those old sayings. Old motherfuckers were wise, yo. Dudes knew shit, yo. So I was thinking. So that saying, “Even monkeys fall from trees,” ya know…so say a real live monkey falls out of a tree, and he falls out and bam, you couldn’t walk up to the fucker and say, “Yo, dude, you gotta watch out, there’s this old saying ‘Even monkeys fall from trees.’” Yeah, old sayings are supposed to be warnings, yo. But a real live monkey that fell out of a tree, think you could actually go up and say that to him? That’d be some cold shit to say to a monkey. Think you could do it? Know I couldn’t. But that reminded me that old sayings are some wise shit for real. Cuz monkeys do fall from trees, ya know. That’s some smart shit. Surprised the hell out of me. Yo, you ever seen a dove get shot by a bean shooter? I have, for reals. A while back I was watching this dove. I’m not fuckin around, yo. For reals. Wise shit, yo. Surprised the hell out of me. So it gets hit by the bean. And then…

The first ことわざ here translates into English pretty easily, but the second doesn’t. In Japanese it is 鳩（はと）が豆鉄砲（まめでっぽう）を食らったよう. Apparently it refers to the look of surprise on a dove’s face when it gets hit by a bean from a bean-shooter. That I learned from this 慣用句辞典, a most excellent resource. Highly recommended.

I also highly recommend 夜のくもざる. It’s a nice, light collection. All of the stories are strange and funny. I believe the hardback edition is out of print, but you can still find the paperback version new.

Here is one of Mizumaru Anzai’s monkey drawings from the collection: 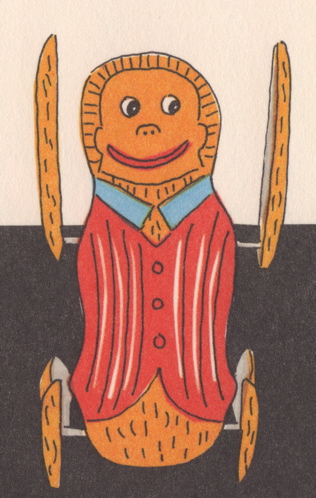 5 thoughts on “Eels, Monkeys, and Doves”