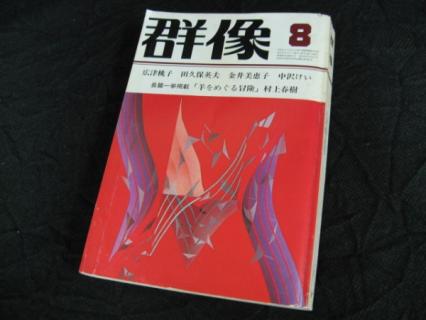 The 自作を語る for A Wild Sheep Chase is interesting. Murakami goes into detail about how drastically he changed his life after publishing his second novel: he moved to Chiba, started taking trips abroad, stopped drinking as much, and basically stopped living the urban social life he’d been living as the owner of a jazz pub.

He wrote the book from the fall of one year to the spring of the next, a pattern that he repeated for Dance Dance Dance. He went to Hokkaido to research sheep, without any real idea of the novel in mind, and he started writing and eventually the sheep fit in to the story. He also mentions how he was driven to write by a sense of competition with Ryū Murakami following the publication of Coin Locker Babies.

One of the things I didn’t know (or had forgotten) was that the novel was published in Gunzō. Murakami writes about that experience:

This work was presented in Gunzō in its entirety, but the editor in charge changed while I was writing, and the editorial department’s objectives also underwent large changes, so while I finally managed to finish the novel, I do remember that its position as well as my own could not be called all that comfortable, to put it honestly—this happened long ago and the situation has changed, so I think it’s okay to put it honestly. I felt something like a mother duck who’d given birth to an ugly, misbegotten duckling. Of course it’s only natural that a magazine have its own proper, magazine-like character and objective, and I didn’t have any problem with those things themselves, but I was left with the impression that, at that time, setting aside short fiction and essays, magazines as a vehicle might not have been suited for sustained work. Writing a full-length novel is truly delicate work. It often demands a focus so lonely that it wears you down. And the slightest thing can throw off the balance of your powers entirely.

This is among the reasons I adopted the system of writing all my novels after this one as kaki-oroshi (new work published straight into book form). Well, I guess people must have various circumstances and ways of working, but speaking from experience, I believe that the form of kaki-oroshi suits me personality-wise. My writing process is to let go of all other work entirely, focus for several months and write everything up in one go, then take my time with revisions, so I’m totally unable to do serialized fiction, but having said that, I do want to have another go at publishing something in its entirety in a magazine. It was through this novel that I also came to understand this writing pace that most suits me. (VI-VII)

I wonder what it was about the new editor(s) and his/her/their new goals that irked him so much. It sounds like they wanted him to make changes to the work that he was uncomfortable with. I wonder if he was submitting excerpts and receiving feedback as he wrote. (He mentions that he wrote 650 Japanese manuscript pages, which was long for him at the time but nothing compared to his recent monstrosities.)

One final interesting thing to note is that Murakami would break this vow just a few years after writing this commentary. In October 1992, he began to serialize the first half of The Wind-up Bird Chronicle in Shinchō. This went until August 1993. The first and second half were then published in book form in April 1994.