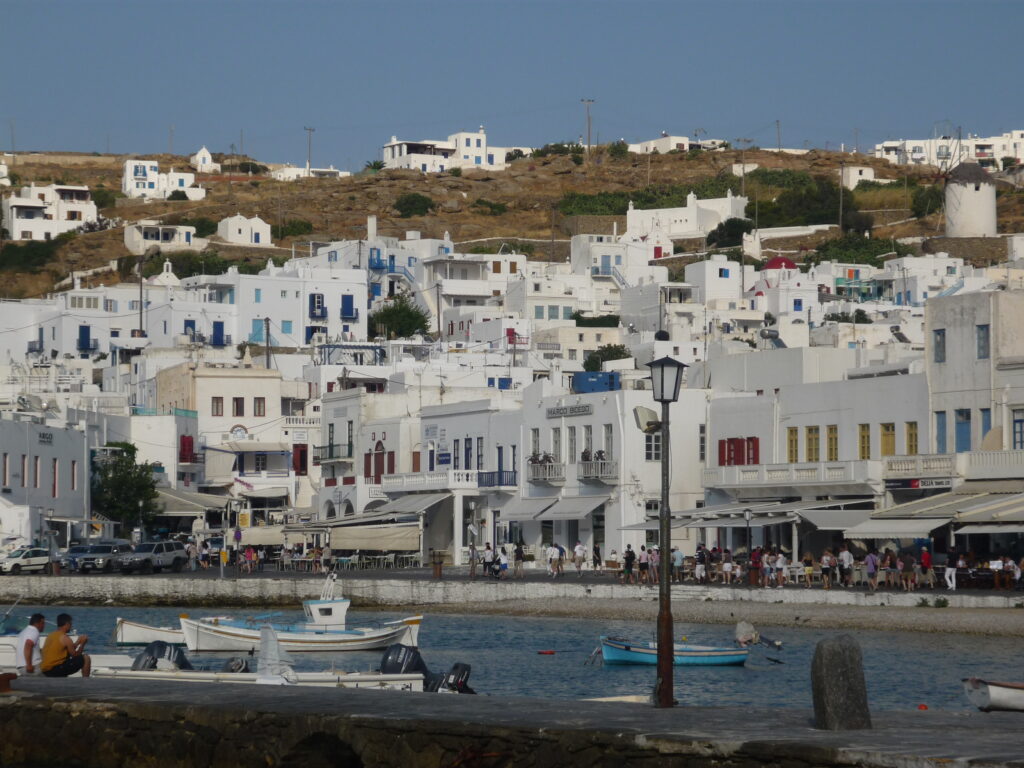 After a cold, rainy fall on Spetses, the Murakamis decide to relocate to Mykonos, which he describes in a chapter simply titled “Mykonos.” Murakami is skeptical because he’s been before (twice apparently!) and it was more touristy than he was hoping for.

But that was during the season. The travel agent convinces him to take an off season spot on Mykonos, which ends up being perfect…and one of his only options. Murkami thought a lot of apartments would be available during the off season, but supply availability drops with demand, and a lot of landlords have already taken off for the year and are on vacation. It becomes difficult to even get in touch with them.

Mykonos in the off season is quiet and he ends up being relatively productive. After a big chunk complaining about the terrible, cold weather and why so many Japanese visit during that season (fall honeymoon season, New Year’s travels), he talks about what he worked on:

But as a result, despite this terrible weather, or perhaps precisely because of this terrible weather, Mykonos during the off season was actually the ideal environment for me to quietly get some work done. Here I completed the translation of C.D.B. Bryan’s novel The Great Dethriffe. It was pretty long, but the story was interesting, and I wanted to get through it quickly and start working on my own novel, so I steadily worked through the translation every day. I still wasn’t using a word processor at this point, so I crammed my writing into a college notebook with a fountain pen.

Once I made it to the end of The Great Dethriffe, I wrote several sketch-like pieces of writing about life on Spetses (the basis for the essays in this book) and then got started on the long-awaited novel. During that time my body had this incredible itch to write a novel. I was parched, thirsting for words. “Bringing” myself to that point was the most important thing. You can’t write a long novel without bringing yourself right up to a point like that. Just like running a marathon, if you fail to make the adjustments to get to that point, you won’t have the breath for the long haul.

That novel would later become Norwegian Wood, but I didn’t have a title at that point. I started writing casually and with the goal of making it a smooth 300-350 pages or so of 400-character manuscript paper, but when I’d written 600 pages I realized, “That’s not gonna work. There’s no way I’ll finish in 300-400 pages.” From that point until April of the following year (1987) I became completely absorbed in novel life as we moved between Sicily and Rome. In the end, the completed novel was 900 pages.

This is a fascinating look at Murakami’s productivity and practices. As usual, he knocks out translations and nonfiction like they’re nothing. The Great Dethriffe is 252 pages, a substantial translation. He then writes the essays. And then apparently gets a draft of Norwegian Wood written in what must be about a six-month span. Absolutely crazy.

900 pages with 400 characters means 360,000 characters, and at about 2.2 English words per character that’s just over 160,000 words. Not a huge novel like the kind that Murakami writes now, and he was working from the short story “Firefly” (nice little ode to “Firefly” right here) but a remarkable feat nonetheless. All done on the road while putting up with storms and all sorts of other challenges (which we’ll see in later chapters)!

Murakami spends the rest of the chapter reminiscing about the different bars on Mykonos. After he writes every day (time his wife spends reading books, studying Italian, playing with cats, and not talking to him), they go to a bar and talk.

As usual Murakami does a good job of capturing the other people they run into. Bar owners, residents who have been to Japan before, the foreign community, and he ends the chapter with a sense that Mykonos is a place filled with people who are a little lost.

This is such a great book (rough at times, but full of energy), and it’s a shame it hasn’t been translated.

A brief aside about The Great Dethriffe. It’s a terrible book. The New York Times panned it when it was published. Japanese reviewers on Amazon have this to say about it:

グレート・ギャツビー（村上春樹訳）を読んで、数日後に読破。残念ながら、グレート・ギャツビーにかないいません。村上春樹さんの力の入れようも違うのかな。(I read The Great Gatsby [Haruki Murakami’s translation] and finished it in just a few days. Unfortunately, this doesn’t hold a candle to The Great Gatsby. Maybe Murakami was wrong to put his energy into this.)

Even C.D.B. Bryan didn’t like it: One of his children has a blog with anecdotes from his letters, including this line: “So I went back to read Dethriffe yesterday and hated every minute of it. Why is it so difficult to reread something after it has been published.”

So I was extremely confused about how Murakami came to translate a book published in 1970 during the fall of 1986, why he chose to do so, and whether there might have been anything in the book that drew him to it or would speak to his own style.

To be an absolute completionist, I bought a copy on Amazon, read a few chapters, and then speed read the rest of the book. It’s not good. There are pages and pages of dialogue that should have been cut, a few bizarre racist and sexist passages (that might be jokes?), and not much going for it other than a prescient sense of how far the Gatsby revival would take F. Scott Fitzgerald stock. It reads almost like a pastiche of Gatsby had Gatsby actually married Daisy and then realized the wanting is better than the getting.

I think the Gatsby connection is the main reason Murakami translated this book. Maybe they thought they could cash in on the connection or something. There are some extended passages of people telling stories, a technique Murakami has used frequently, but he had already developed it at this point in his career. It wasn’t anything new. Bryan also makes the mistake of telling these stories completely within dialogue, never switching to third person, which is one of the pleasures of the technique.

Murakami returns to Mykonos 24 years later to make a pilgrimage to the spot where he wrote Norwegian Wood, and he’s actually able to take a peek into the place where he lived. I wrote about this essay back in 2016.