I remember seeing 購入（こうにゅう） in an email at some point during my third year of study and being significantly confused. At that point I didn’t have enough experience to realize that 購入 was simply 買う in a more complicated disguise – think "purchase" instead of "buy."

On Monday, a little second grader marched into the teacher’s office, announcing, “I’m Tatsuyoshi from second grade and I’m here to see Chika-sensei. May I come in.” After a few moments it was clear he was just bored, and two teachers had the following conversation:

which prompted a round of laughter. Your goal is to explain why it’s funny. 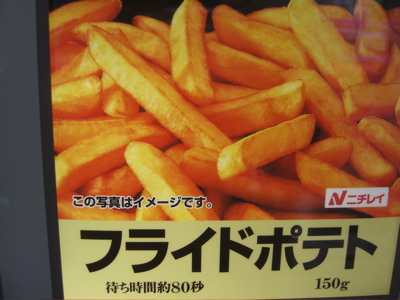 I had a record number of entries (6!) for this weeks puzzle! Lots of interesting ideas. I’ll go through them.

Robyn suggested “Serving suggestion,” which he said was from Australia. I like the efficiency (it was the shortest answer), but it sounds more like a recommended amount of food (e.g. one cup, two doughnuts, 27 Miller Lites) than a warning about possible misrepresentation.

Brian suggested “Enlarged to show texture,” which is so awesome and sensuous (mmm…texture) and sounds very familiar to me, but the “enlarged” part takes more license than I would like.

Kiyoe offered the excellent “This is an artistic representation of the product,” which may have been the sole winner had she submitted it as “Artistic Representation, but…

The winner for serious answers goes to Aleisha, Kiyoe and Randall, who all suggested slight variations on the traditional, “Actual product may vary.” I’m feeling generous, so instead of random selection, I’ll give a beer to everyone. This phrase is, if you think about it hard enough, just as strange as 「写真は、イメージです」 Seriously, how much will this product actually vary? And in what way will it vary? I hope not too much.

I was disappointed with everyone’s attempts at humor. Thomas’ “Your Mileage May Vary” came closest, so he gets a can of 発泡酒 (or Miller Lite, whichever he prefers).

I leave you with a bunch of “proz” discussing this term. (Strangely enough, another Morales raised the question!) If you ask me, they’re all just a bunch of toolz. You guys did much better.

I spent the last couple of months apartment hunting in Tokyo. At first I hoped to get my own apartment, but after realizing that would require an initial payment of $3000 plus to an agency, I started to look for a roomshare.

Fortunately, there are some nice websites out there. I replied to several ads and even put up one of my own. I ended up exchanging a lot of emails with Japanese people, and the thing that surprised me was that in nearly all cases, they began mails with 「last nameです」 or 「first nameです」, so 「田中です」 or 「洋平です」 This continued no matter how many emails we exchanged, which I thought was weird at first. Of course I knew who the person was. Did they really think I had forgotten?

I eventually started thinking of it in terms of airbag phrases; it’s just a polite way to begin a Japanese email, a warning sign of sorts, one that’s used on the phone as well. Does it require a translation or easily identifiable English equivalent? Hell no. Get used to it.

Well, you can mark it. Rainy season has just begun in Nishiaizu. It started raining yesterday at around 7 or 8 at night. Up until early last week, it was still a little chilly at night, and the air was crisp, but on Friday it finally got humid – it felt like someone put a lid over this whole area.

One of my favorite parts about being a JET is listening to the Japanese teachers talk to the students in Japanese. I’ve picked up a lot of useful phrases over the last few years. I used 「反応なし」 quite a bit my first year and finally understood how to create simple imperative sentences like 「声を出すんだ」 my second year.

On Friday I heard the teacher use the phrase じめじめ after I said it was really humid during the introductions. Pretty easy to understand from the context. I went to double check it in alc before writing this post, but nothing came up, so I googled it.

じめじめ is an example of Japanese onomatopoeia/mimetic words. Often two syllables are repeated. Knowing a decent number of these will really expand your vocabulary. The meaning for each different is often very specific, which also makes them very efficient.

Usage varies, but there are several distinct patterns:

I found this example of the じめじめ usage, and this excellent grammatical explanation of onomatopoeia – in Japanese 擬音語（ぎおんご） and 擬態語（ぎたいご）.

While I only remember two from the class, I’ve been collecting my own エアバッグ表現 ever since I learned the term.

I would put the following two terms in the same category: 〜ですが and 〜の件ですが. Both serve as a warning that you are about to address a certain subject, and with the right intonation and a slight pause after the が, you can convey the idea that you are about to raise a touchy subject. 件 literally means subject. For example, an interviewer might say:

Both serve as a warning that the administrative office fees or declining birth rate will be the topic, giving the interviewee a small amount of extra time to organize his thoughts.

悪い（わるい）ですが is kind of the Japanese way of saying, “My bad” preemptively. 悪かったです is the way you would do a true “My bad.” I believe I used it successfully the other day in Himeji Station – 「悪いですが、両替（りょうがえ）もらえますか。」I was trying to store some luggage in a locker, but, as is often the case, there was no change machine. I approached a bento lady and said, “Sorry to ask, but could you change this bill?” She gave me a kind of reproachful grin but then handed me the coins anyway. Robin told me that he was yellow carded for inappropriate usage of 悪いですが. Apparently, it is used for people beneath you in the Japanese social hierarchy, so perhaps the lady was just pissed off that I was talking to her as though I were her boss. It does smack of someone in an authority position would use to explain slacking or some other mistake, so use with caution.

I remember this kanji because when we learned it, one of my classmates made up a sweet mnemonic to remember the word 条件（じょうけん）. He knew that it had the 人弁 (にんべん, person radical), so he gave both of the characters names – Joe and Ken.

件 by itself is also pretty useful. My teacher in Tokyo used to make us use it in the subject lines for emails, e.g. 期末テストの件 (a subject I used back then), 小学校訪問の件 (a subject line I actually use now), or 田舎ビール種類不足の件 (a topic that I would like to raise now). Basically it is the “RE:” that you see (or used to see…has this died out?) in the subject lines for emails meaning “regarding such and such.” It’s an easy way to make your Japanese emailing more professional. 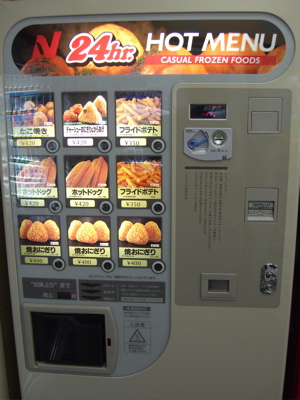