I’ve been listening to NHKラジオニュース (NHK Radio News) more regularly as an end-of-year resolution of sorts, and I have two strategies to pass on:

Many of the news updates are just 3-5 minutes long, so you can steamroll through them. Most will include the same top news stories for the day, so you get a ton of repetitions with the same vocabulary. Always a good thing.

If you’re living in Japan or working with Japan, now feels like an especially good time to be tuned into what’s going on.

These have meatier (meteor?) content. Longer news blasts, more analysis, and some random content sections. Like on December 10 when they discussed 筋肉のつり (Kin’niku no tsuri, muscle spasms) during the ジャーナル医療健康 (jānaru iryō kenkō, Journal Medical Care and Health) section.

I learned a lot about how to express muscle spasms in Japanese. Not only is it a noun as shown above, you can say things like 急に筋肉がつった (kyū ni kin’niku ga tsutta, My muscle suddenly spasmed) or つってしまった筋肉 (tsutte shimatta kin’niku, Muscle that spasmed).

Based on a few Google searches, it seems like the word is most often expressed in hiragana, and not the very cool kanji 攣る (tsuru).

In addition to vocab, you often gain access to different cultural concepts through the show. Including meme-ified bits of the culture.

In this case, the expert who was discussing muscle spasms was explaining how to prevent them, including how to stretch your ふくらはぎ (脹脛, fukurahagi, calves). This involves putting one foot up on something 30-40cm high and then stretching the calf of the other leg. He likened it to a famous pose:

石原裕次郎さんが波止場の船のロープを____くいに片足を乗せて決めるあのポーズのようなイメージですね (Ishihara Yujiro-san ga hatoba no fune no rōpu o ____ kui ni kata-ashi o nosete kimeru ano pōzu no yō na imēji desu ne, It’s like the pose that Ishihara Yujiro struck where he’s ___ing the boat rope on the wharf, with his leg up on the post).

As you can see, there’s one word I couldn’t quite catch—this happens—but I got the gist from context. (It sounded like ひっかくる? Anyone have the answer?)

It’s pretty easy to imagine what this pose looked like, but I was curious so I tried to track it down. This is about the closest I could find: 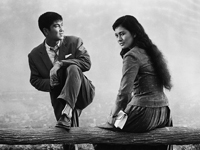 This is a scene from 赤い波止場 (Akai Hatoba, Red Quay) from 1958. (On a side note, Yujiro was also in a movie called 波止場野郎 in 1960. I love this title, and nothing would please me more than to translate it poorly into English, but I will resist this temptation.)

There’s also this “Forever Yujiro” set of Zipang sake which has Yujiro in a similar pose? 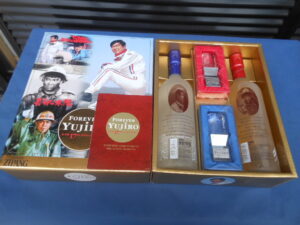 Whatever the origin of the pose, Yujiro, who is basically Japanese Elvis (full credit to the graduate assistant who made this comparison when I was an undergrad), has effectively made this the pose to strike when you find yourself dockside. Do a quick Google Images search for 波止場 ポーズ. Kind of amazing, no?

We also have confirmation from Chiebukuro where a guy asks “What are those things on docks called? You know, those little fuckers that Yujiro puts his foot up on?”

This is clearly a cultural phenomenon.

At any rate, I now have a new goal in life – to stand on a dock in Japan striking this pose. Montrose Harbor in Chicago may have to do for now.