Get it yet? No? Give those another quick look.

Yup, it’s the kanji for orange. You see it infrequently, almost always written. So yeah, supposedly it’s pronounced だいだい色(いろ), but I wonder if people just read it オレンジ. Can any native speakers confirm? 橙 is generally used as the color in the rainbow, but Wikipedia also tells me it came from the Chinese fruit the daidai…which looks like a mikan, except the English name is bitter orange? I’m keen to try one.

The other cool kanji in there that you might not know is 藍(あい), which is indigo. Wikipedia Japan says that Americans generally think the rainbow only has six colors, but I can personally confirm that is bogus. Clearly Wikipedia Japan hasn’t met Mr. Roy G. Biv – that’s the acronym I learned in elementary school to keep the colors straight.

This Japan Times piece about 第三ビール features none other than Chris Chuwy, the guy who runs the boozelist I’ve linked to several times. Chuwy is in fine form:

"Feels like I’ve just woken up and need to brush my teeth" (Chuwy on Reisei, a dai-san brewed from yellow-pea protein, 5 percent, ¥139)

And this non sequitur:

Chuwy opined that champagne was like a gassier version of Asahi’s Style Free (dai-san, 4 percent, ¥159), which he meant as a criticism, describing champagne as "unnecessary".

And I already knew this one:

Pulls on hip-length boots and prepares to wade blindly through territory normally reserved for Treyvaud.

Sure, I’ll admit that post title is half fishing for search hits and snarky comments, but http://urusai.jp basically asks you to make that same equation. The page is a Nestlé coffee ad disguised as quasi-日本人論.

I came across it while searching for 五月蝿い, a set of ateji for うるさい. You have to dig pretty deep in the page to find the article addressing the reason why it gets those kanji, but it also explains that うるさい, then written 煩し (don’t ask me how that gets pronounced…うるさし？), initially meant “incredibly skilled or of great personal fiber.” It was associated with a quest for perfection or completion, I believe, and as everybody knows, those are generally the most annoying types of people, so うるさい also came to take on the feeling that other people had towards these class suck-ups – one of distance and annoyance.

うるさい definitely means “of a loud and generally unpleasant volume,” but as shown all over the front page, it can also mean a sort of perfectionist, a stickler. The front page is covered with examples of the pattern Xにうるさい: 四季にうるさい, 旅にうるさい, 言葉にうるさい, コーヒーにうるさい. “The Japanese are sticklers for the four seasons, travel, coffee, etc.” ALC provides fastidious, which is another way to say it. I guess the simplest way to express it naturally in English would be something like, “The Japanese are serious about coffee.”

Although to be honest, truly コーヒーにうるさい people are not going to be drinking Nestlé instant coffee.

I think Dimitry Kovalenin has a livejournal account? If so, that’s awesome. It looks like he might be doing the Russian translation of 1Q84? Also, a commenter on the entry found information in a database of proteins, or something, with the label 1Q84. Apparently the enzyme acetylcholinesterase is also related. This enzyme is active in synaptic transmission and is the target of certain nerve agents…namely sarin gas. Which would make me seriously re-think prediction 3 – maybe he’ll address the Aum attack rather than WWII. Hooray for Google Translations.

Yes, this is all super-otaku, but if you can’t find something in life worth getting crazy about, then you’re probably a really boring person.

Dimitry, if that’s you, I’m sorry about the kumozaru thing, heh. 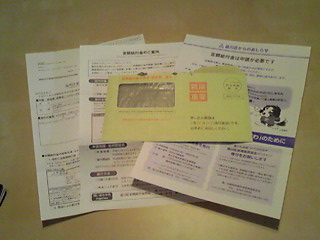 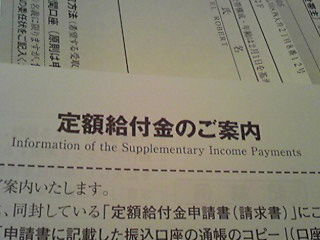 Hooray, the green envelope finally arrived. The only curious thing is that my four Japanese roommates got their envelopes a few days, maybe a week, earlier. My Korean roommate and I got ours today.

Gaijin Bash has an awesome set of photos from a 廃墟 (はいきょ) he busted into. Check out the link to learn what the compound means. 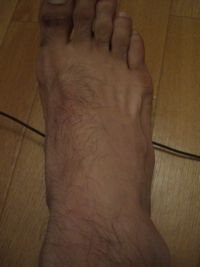 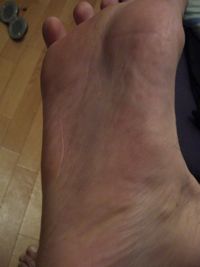 Speaking politely in Japanese isn’t just about being deft with keigo. Keigo, which you use constantly and just don’t realize it, is just a small part; basic word choice is also important, as it is in English. There are several different ways to say the same word, and generally the longer the phrase is, the more polite it is. One of the best examples of this is the many different versions of いい. You can power up your いい, but you can also power it down to ええ depending on who you’re with.

Sometimes you need to use an entirely different word rather than a variation of the same word. This is especially true of English. I vividly remember the moment when I learned the definition of the word “asinine.” I was a freshman on the debate team and heard a senior member use it in a speech. When I asked him the definition he said, “It’s a nice way to called someone or something stupid.”

Unfortunately I don’t know how to say asinine in Japanese. I do know, however, that すごい is not going to cut it in important business meetings (just like “stupid”), which is why you should swap it out for it’s more polite cousin 非常(ひじょう)に. すごい, however, can be both adjective and adverb, while 非常に is only an adverb.

When you’re swapping for the adverbial すごい or すごく, you can do a straight-up replacement.    So you can do this swap:

(You might want also consider powering up that 危ない to the compound noun form 危険(きけん), which is the third option up there. I guess this really belongs in another post, but 非常に危険 felt more natural to me, so I went ahead and added it.)

The adjective version of すごい requires you to be more specific with your description; this is a good thing to practice, even in English. So rather than something being “awesome” or “great,” you can say something like 非常に質がいい (it’s of incredibly high quality), 非常にきれいな (it’s incredibly beautiful), or just 非常にいい (it’s incredibly good).

I have to credit my senior year Japanese professor here. Until she noted this easy switch in class, I don’t think I had a grasp of the meaning of 非常に.