Paul Snowden worked for over 40 years in universities in Japan. He taught at Tsukuba University, took a tenure faculty position at Waseda University, later served as the Dean of the School of International Liberal Studies at Waseda, and most recently was Vice-President of Kyorin University. He is also one of the three editors-in-chief of the Fifth Edition of Kenkyusha’s New Japanese-English Dictionary, affectionately known as the Green Goddess.

You don’t have to go very far to be a tourist, and looking at the world with that mindset can also be helpful for language study. In this week’s episode, I reminisce about when my parents visited Tokyo and talk about ノーダメージクリア (nōdamēji kuria, completing games without taking any damage).

The book I mention in the episode is Sumiko Enbutsu’s “A Flower Lover’s Guide to Tokyo: 40 Walks for All Seasons.”

I was in The Japan Times with one of my favorite Bilingual page articles I’ve ever written: “Focus on sentence endings to ‘see the future’ in Japanese.” 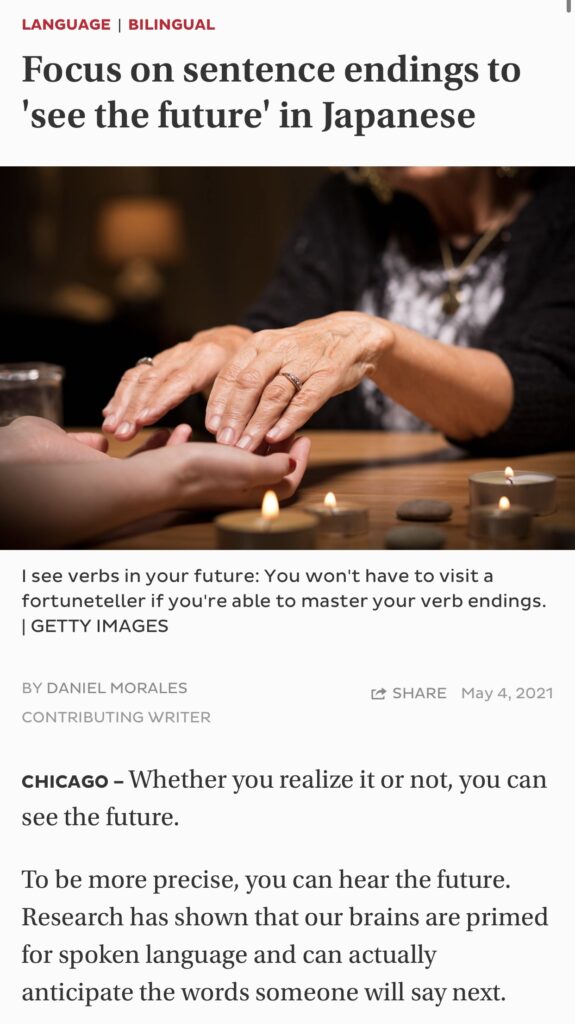 This is another product of my now daily NHK habit. I’ve been thinking a lot about listening, which is one of the most tenuous of all language skills. Sometimes the words just slip right through my ears like sand through fingers, and other times I’m able to clearly understand every sentence. It takes a certain level of attention—you can’t zone out—but try too hard and you’ll get caught up on each individual word and start to miss the overall sense of things.

I started to notice that I could anticipate sentence endings and that if I could kind of channel my attention to the content in the core of the sentence, it was easier for me to understand what was being said.

There are a couple of types of sentences that I wasn’t able to cover in the article. The first is the Xです (X desu) sentences, where X is a noun that helps convey expectations or beliefs. The two that are coming to mind now are 見通し (mitooshi, forecast/outlook) and 考え (kangae, belief).

Here’s an example that I have noted:

I have to believe that the core part of this sentence (感染を抑え込みたい) was longer in the actual example and that I simplified it as I prepared to write about it. You could use this construction to do a lot of additional work, specifically by noting how the government plans to prevent the spread. It would be easy enough to do this by adding a clause to the front of this “X.” It could get as long and detailed as you need it to be.

The other expression that I wasn’t able to mention was what I’ve previously called “appear-ative.” (Please forgive me for calling it a “tense” in the past; I will always carry this shame, lol.)

You can take these phrases I mentioned:

And easily create a slightly different impression by turning them into this:

Once you start listening for some of these frequently encountered sentence-ending phrases, you’ll find them everywhere. They can be as simple as a single noun and as complex as longer phrases like these:

Have you noticed any others?

Jenn O’Donnell is a Japanese to English translator and project manager based in Osaka. By day she works as a Localization Director for a video game company and by night she blogs about translation on J-ENTranslations and studying Japanese on Japanese Talk Online. She also hosts the podcast Recommendations from My Otaku Spouse.

Episode 2! 一番搾り (Ichiban Shibori) helped me cement my understanding of a translator’s role and what “fluency” means. And I was able to get this podcast up and running again thanks to a little 自己分析 (jikobunseki, self analysis).

Mel Ok is a translator and project manager based in Tottori Prefecture. We talked about Japanese study, the JET Program, translation, and Japanese whisky:

お待たせしました！ It took me longer than I hoped, but the How to Japanese Podcast is back. I’m interviewing another 10 people who have studied Japanese and done work in Japan. The interviews have run long, so I’ll be separating the interviews from my content and posting 20 episodes over the next few months. Subscribe wherever you get your podcasts.

And if you haven’t listened to Season 1, go ahead and give those episodes a listen.