55-65 read and understood. Most of this section was spent in the End of the World, which was awesome. The paragraphs suddenly become longer and denser, and Murakami takes the reader through the buildings of the town for the first time. The text thins out a bit thanks to dialogue once the Librarian gets introduced.

In terms of the translation, I was really interested in some adjustments that Birnbaum makes towards the end of the previous chapter during and after the data laundering process. The old man explains what the data is, how he’ll use it to control sound, and Watashi says that he should be careful that it doesn’t fall into Semiotec hands:

“I know, I know. That’s why I’ve withheld all my data and processes, so they wouldn’t be pokin’ into things. Probably means even the world of science doesn’t take me seriously, but what of that? Tosh, a hundred years from now my theories will all’ve been proved. That’s enough, isn’t it?”

“Okay, son, launder and shuffle everything.”

At first I thought that this was an egregious translation, but after I typed it out and thought about it for a while, there’s really only one minor part that Birnbaum cuts, and the rest are just “adjustments”:

“I’ve also been keeping that point in mind. Which is why I’m concealing the data and processes; I’ll only be announcing it in theoretical form. Then there’ll be no way they can decipher it. The academics will probably come after me as well, but who cares about that. In a hundred years all my theories will’ve been proven, and that’ll be enough.”

“So it’s all up to your laundering and shuffling, ya see.”

The only line cut (which I’ve bolded), I realized on second read, is the fact that the old man will be presenting his theories, which isn’t apparent in the English. On first read I felt like it made the old man slightly more sinister and interested in the fame and acclaim. I guess it’s not a major change either way, but it does contrast with the English.

The adjustments at the end of the section, however, are more radical. Birnbaum has the old man encourage Watashi and Watashi replies with a simple affirmative, whereas in the Japanese Murakami has the old man place the responsibility squarely on Watashi’s shoulders and then has Watashi reply with the なるほど. I can’t tell how sarcastic this was meant to be; is it on the same level as a やれやれ or slightly lower? I went with “That figures,” (get it, figures? Ha ha.) but I think “Of course” might work too.

Birnbaum also plays with Watashi’s characterization at the very end of the chapter. During a break in the data laundering, Watashi asks about the mute granddaughter, and the old man curses himself for forgetting to return her speech to normal. Then the old man says he needs to go back and return her to normal. Watashi’s response in translation is merely:

But in Japanese, it is this:

Here again Birnbaum alters one of Watashi’s lines of dialogue at the end of a section making him seem more aloof and less sarcastic in translation. Although as we’ve seen in other posts, he is adding a generous amount of it back in in other places. 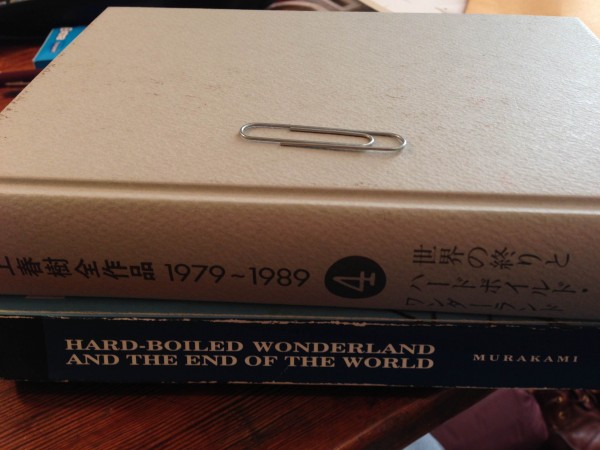 UPDATE: 2012.12.07. The scholarship recipient has been selected! The recipient is a resident of Iwate Prefecture and works at her parents’ ryokan, so learning English should be helpful for her in the future. Congrats!

Hey everyone. I’d like to take just a moment of your time to spread the word about a scholarship that the University of New Orleans Intensive English Language Program (IELP) will be offering for victims of the 3.11 disaster. The scholarship will cover most everything except for transportation. I personally know several of the teachers in this program, and they are fantastic people. If you know anyone who would be eligible for this, please do let them know. Anyone 18 and over affected by the disaster can apply (not just university students). Please share this widely!