Gerund series briefly interrupted to deliver this breaking news: today is the last Friday in October, and therefore you have two days left to get your Oktoberfest on. Recommended locations: Baden Baden, Zum BIERHOF (where they do the “Prost” song/dance every 30 minutes or so, kind of like an Epcot exhibit in the middle of Shinjuku), and Frigo.

In honor of the end of October, the cool kanji today is 独. It means “alone” or “single” and also Germany because it’s used in the ateji for Germany (独逸). Newspapers and news programs use it often to refer to the Deutschland, especially when it makes abbreviation easy – e.g. 日独関係 (Japanese-German relations).

Every country has kanji (here is an awesome list), but not all of them get used. The third column in the chart on Wikipedia has the abbreviated version (略称), and it looks to me like those are the ones you see most frequently. Knowing these will be useful when you make that appearance on a Japanese quiz show as the token foreigner someday.

I think Russia (露) and France (仏) ended up with the coolest kanji. The Soviet Union (蘇) had a cool one, too. Another link if you’d like more detailed explanation of each kanji in English.

The pattern ～てくる is also really useful way to express a change in state. I remember it being a confusing pattern when I first started studying Japanese, but I solved that problem by using it constantly (regardless of whether or not it was appropriate) because, let’s face it, shit be changing, yo. (Cue Tupac track.) Gradually I’ve narrowed down the appropriate usage conditions.

The first clause sets the scene – work was busy and it sucked. But (there’s the fulcrum for the change) things have settled down (or so he thinks). The second clause shows how things have changed from the first clause. They have gone from an 落ち着いていない condition to an 落ち着いている condition. The きた, I feel, helps emphasize this transformation and the やっと impresses exactly how long the subject was waiting for the きた to くる so he could キター！

So the next question is what’s the difference between ～た and ～てきた? It’s pretty subtle. Another example. I got a birthday package from a friend in the US the other day. If my friend spoke Japanese I could say that it got here with a simple 荷物が届きましたよ. Just the basic way to say that the package was delivered. I could also say 届いてきたよ, which feels more urgent – as if my friend or I were awaiting the arrival of the package slightly more desperately. Maybe the package was delayed? Maybe there was a kitten inside?! Or maybe we were just waiting to compare the USPS with Japan Post. (Japan Post wins.) As in the example yesterday, the きた・くる seems to address a sort of mutual understanding that exists whereas the plain form of the verb is best for communicating brand new information.

〜なってきた・くる is another pattern that you can use to express how something changes. An example: 寒くなってきた. Like Monday, the timeframe feels more specific, as in 最近 or 今日 or 今週. And once it’s cold enough, (you can use Monday’s pattern to say…) 雪が降ってくる.

This week I’ll explore the glories of the pattern ～てくる。The eternal caveat: trying to get back to the core of How to Japonese, this week will be especially unfounded in textbook “learnin’.” I’m looking back through the fog of time, thousands of hours of study, and countless repetitions in an attempt to narrow down the “sense” that I’ve developed for this pattern and how I came to that sense. How I’ve gotten used to it, I guess. Hope it’s helpful.

For me, this pattern represents the earliest stages of getting used to it. Jay Rubin’s book Making Sense of Japanese is the Bible of “getting used to it.” I first read through it my sophomore year of college. Not all of it sank in immediately, but this pattern did. He has one short section titled “Go Jump in The Lake, But Be Sure to Come Back” where he calls 〜てくる an idiomatic expression; in English we say “go do,” and in Japanese they just happen to say “do and then come.” Get used to it.

The most basic ～てくる pattern is 行ってきます, which is what people say when leaving the house in Japan. When translating, it’s probably best to go with something like “I’ll be back” or “I’m stepping out” or even “See you later.” The expression literally breaks down to “I will go and then come (back)” but really only means “I’m going.”

That’s easy enough. You can extend this to any activity:
弁当（を）買ってきます。 I’m going to buy a bento. (Because I can’t be asked to make anything.)
一服してくるよ。 I’m taking a cigarette break/rest. (Because this office is hot as hell!)
まい泉でトンカツを食べてきた。 I went and had tonkatsu at Maisen. (Which is why I can’t get up from the couch.)
年末ジャンボを二枚買ってきた！ I bought two New Year’s Jumbo tickets! (And when I win I will retire at 28.)

The big question is what is the difference between plain, old 買いました and 買ってきました. The former conveys only the basic information – you bought something. The second one feels more like an event, one that the person being addressed was previously aware of – you went out and bought something that you had been talking about earlier. (You can see this implied information in parenthesis for the examples above.) And 買います and 買ってきます？ The former to me feels undefined in terms of timeframe, whereas the latter is going to happen sooner or at least in a more specified timeframe such as これから or 明日 or お金がたまったら.

I’m going to go ahead and say that you should be using this pattern 40% more often than you currently do. So go on. Get out there and go do some stuff. And come back when you’re done.

The counterpart to 決定 is 選択 (せんたく); this is what you are locking in when you 決定. 選択 appears non-stop in manuals and games and is basically a way of saying 選ぶ (えらぶ) with a compound noun. “Choose” and “select” are both options, but I think I prefer the latter, possibly because it’s more flexible: it works as a plain verb (“Select an item.”) as well as “noun” (“Mode Select screen”). “Choice” and “selection” can be used when it is a real noun.

Bonus link to make up for my measly little post today. Matt has a great explication of a passage from Akutagawa’s story “Rashōmon.” Definitely worth checking out. Great info in the comments as well.

Last Wednesday I forgot to include the most basic informal causative request pattern – やらせて (yarasete). “I wanna try!” “Let me have a turn!” I spent three years teaching and being neighbors with Japanese elementary school students, so it must have been them I really learned the pattern from and not the JHS English teacher as I claimed. There were two kids in particular who knocked on my door to play DS and they always wanted to use my DS…probably because they had already scratched up the screens on their own.

Sadly (and surprisingly) I can’t find a video demonstrating the proper intonation, but it should be super whiny with heavy emphasis on the や and せ. A less whiny version is useful when someone is bumbling and you know that you can do whatever it is better than they can. Just try not to show your frustration. 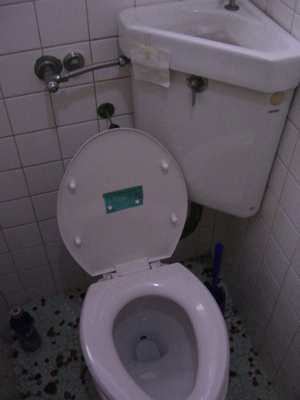 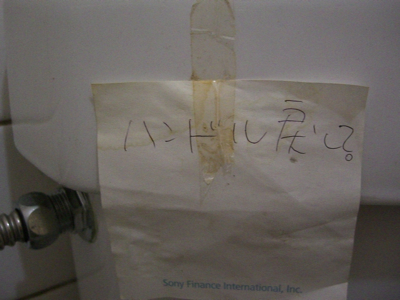 Matt added a couple of great comments to Wednesday’s post that are worthy of their own post.

Dude, I totally got dinged for calling -te the imperative form the other week. You’d better watch your back.

I just want to summarize the “miru 見る is controversial” thing for non-reading linguists: “miru” does indeed become “misaseru” if you add the “-saseru” ending according to modern rules. The controversy is whether it is acceptable to use this form instead of “miseru”, which is a separate verb meaning “show”. As far as I can tell there are two prongs to the controversy: (1) “misaseru” and “miseru” are equivalent, therefore the former is redundant, therefore it should not be used (you wouldn’t say “shisaseru” either, just “saseru”), and (2) “miseru” itself can be analyzed as “miru” + OJ causative suffix, therefore, “misaseru” is an ugly, modern usurper, functionally and semantically identical but aesthetically and morally inferior, and should be avoided. I’ve seen similar complaints about 着せる vs 着させる.

The counterarguments to the above include (1) to some speakers at least, they aren’t equivalent; everyone has “miseru” in their vocabulary, and the fact that some people also use “misaseru” indicates that for them it performs a function that “miseru” can’t, and (2) whatever, dude, living Japanese isn’t bound by your rules and regulations, and these forms sound fine to me.

Nice. I see how they are semi-redundant, but I also see the logic behind having them both – one is “you show it to me” and the other is “please allow me to see it.” Even in English the latter feels more かたい, which is why I think all three of the links bring up television “announcers”: people on television, especially the MCs for game shows, speak in keigo constantly. They are a dirty petri dish for the evolution of polite new linguistic terms (or at least terms that sound new/strange to everyday folk). Japanese people love arguing about this stuff. I heard lectures about 不思議な日本語 or whatever at three different midyear conferences during my stint as a JET, and at each one the speaker debunked some sort of new keigo usage.

さ、参りましょう. Matt then provided this great parallel which shows that these must be separate terms:

Incidentally the case for non-equivalence is more obvious with “kiseru” vs “kisaseru”. The former means “put clothing on someone” (e.g. a child) and the latter means “cause/allow someone to put clothing on”. Because there is an indirect object the difference is more stark, but then compare to “miseru” vs “misaseru” using a fanciful but parallel definition: “put something into someone’s visual cortex” vs “cause/allow someone to put something into their visual cortex”. The difference, or at least the possibility of some speakers keeping the two conceptually separate, becomes a little clearer. 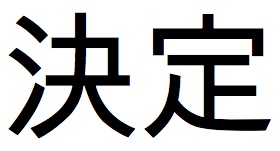 決定 (けってい) is generally a selectable icon on the screen or the action of one of the buttons on a video game controller. You use it to lock in settings or confirm selections, so it can be translated as “confirm” or “enter” depending on context. This is definitely a word that I’ve seen far more often since starting this job. I’m sure it gets used out in the real world (probably more along the lines of “come to a decision”), but I don’t think I ever had the opportunity to use it personally.