We live in a world where the son of Jewish Ukrainian immigrants can grow up in California, get inspired by mariachi music, go on to an incredibly successful pop career in the US… and have one of his hits take on a completely different life in Japan.

The song has served as the All Night Nippon theme song for 55 years. It has a dedicated Japanese Wikipedia entry but not an English one.

I always associated the song with Ninety Nine, but I started using Radiko recently and noticed that it also plays for オードリー (Audrey) and their ANN shows as well.

These are all available on Radiko along with a lot of music shows, like Tatsuro Yamashita’s Sunday Songbook, and news. Previously aired shows are available for a week after they’ve run, and there’s a ton of live content available as well. I have confirmation that Radiko will work abroad with a VPN, and there’s a plugin for Chrome-based browsers as well.

It’s difficult to express exactly how much Japanese language content is available right now. It’s an impossible amount. Literally unimaginable to 1999 Daniel. Radiko is just a drop in the bucket. Now that I think about it, I don’t think I could input Japanese into my computer until 2002 or 2003 at least…I have vague memories of needing to use a Hotmail account to send Japanese emails because my college only had ASCII-based email or whatever.

This is just a short post to share this resource, but I guess one of the lessons is that it’s all out there for you right now. Consistency is the way to understand it all, which I’ll get into in the newsletter this month…keep an eye out for it.

Hard to believe that 2020 is finally coming to an end…or is it?

I’ve had a couple of tweets do pretty well the past week, and I’m going to attribute most of the success to sheer luck. I happened to be transcribing a 悩み (nayami, problem/distress/sorrow) from Higashimura Akiko’s podcast (same episode I mentioned in the newsletter this month, just an earlier call) the other day and came across the great compound 悠々自適 (yūyūjiteki), which felt incredibly appropriate to share: 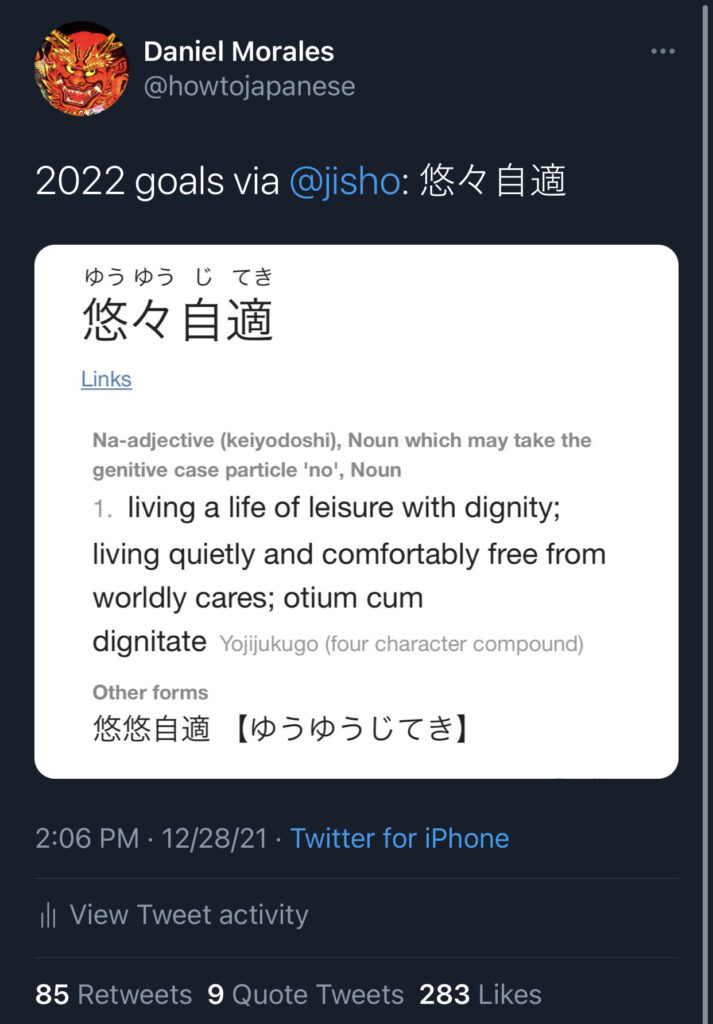 This is definitely my personal goal for 2022, although I do feel like it’s a luxury to be able to completely tune out the outside world. Once I get through the program I’m in, I’m planning to make phone calls for the governor’s races in Georgia and Florida, and I hope you contribute time or money as well.

As for Japanese language study, I do think it’s incredibly helpful to transcribe native Japanese audio from time to time. I find myself doing this for my writing every now and then, usually from NHK or Higashimura-sensei’s podcast, which provides good balance between 報道 (hōdō, broadcast) language and more natural language. It’s obviously helpful to listen to these without transcribing to practice your listening skills at a native pace, but transcription forces you to get in there and confirm particles and verb forms in a way that enables you to then implement the patterns more accurately. It’s not fun work, but if you can set a schedule to do this once a month or so, I promise that you’ll find yourself improving.

I hope that you all find the time to take a breath at the end of the year. I was really looking forward to spending the New Year’s holiday in Japan. There’s really nothing like relaxing in Japan during that period. I will admit that I’ve enjoyed the 80F/24C days in New Orleans I’ve had the past 10 days, and I’m also looking forward to returning to my monastic existence in Chicago. I’m probably putting together a virtual hang for New Year’s Eve, so if you’re a friend of the blog, reach out and I’ll share the link. Otherwise, 良いお年を！

I am extremely ご無沙汰 with my Japan Times update. I had two articles published at the end of August.

The first — “Make Japanese politics more concrete by training your ears” — was inspired by this little passage I heard on NHK Radio News on June 14 at 7:00pm. I was so surprised I could understand it that I transcribed this passage about the Israeli elections:

For whatever reason, the sounds all just stood out. う and さ do so much work despite each being just a single syllable. It gave me an intense appreciation for all the time I’ve spent doing Japanese, and at the same time it made me wonder what was the best way to communicate this phenomenon to students who are just starting their studies. There’s such an emphasis on learning what the language looks like visually that the importance of the sounds sometimes gets lost in the shuffle.

Please also enjoy this introductory paragraph that got lost on the drawing room floor:

There’s something comforting about the infamous English textbook phrase “This is a pen”: It’s so physical and definite, not to mention the nearly one-to-one correspondence with the Japanese equivalent これはペンです (Kore wa pen desu). You can imagine students on any side of the Pacific, desperate to cement their understanding of the language, wrinkling their brows with focus as they stare at a pen clutched in their hand.

So that’s where my mind was when I wrote the article. I think there’s a way to do “flashcards for sounds.” I’m not sure exactly how it would work. Maybe it’s something that teachers could implement as as short activities alongside regular coursework. Drilling sounds. The one thing I remember doing to train my listening was transcribing things that the teacher said.

I also had an article about 敬語 (keigo, polite speech): “Let the verbs do the work when it comes to pronouns and polite speech in Japanese.” Something that clicked for me at some point was the idea that pronouns are naturally built into Japanese speech patterns. Polite speech is pretty complicated, but one thing that’s easy to understand is that certain verbs correspond to people of different social status (e.g. the Emperor gets his own special verbs) and make it so that you don’t actually have to say their names.

And here’s a paragraph that got cut from this article as well:

Keigo is extremely useful in situations that might require you to be a little nosy. For example, if you need to politely ask for someone’s name (either for the first time or because you can’t quite remember it), you can take the versatile verb 伺います (ukagaimasu, to ask/to visit/to go) and use it in a sentence like お名前をお伺いしてもよろしいでしょうか (Onamae o o-ukagai shite mo yoroshii deshoo ka, May I ask your name?).

This will be my last post on this side of the Pacific for a bit: I’m heading to Japan in just over a week! Stay tuned here, on Twitter, and over at my newsletter for any insights I encounter. I’m sure there will be many.